What is Ad Position in AdWords & Why is it Important? 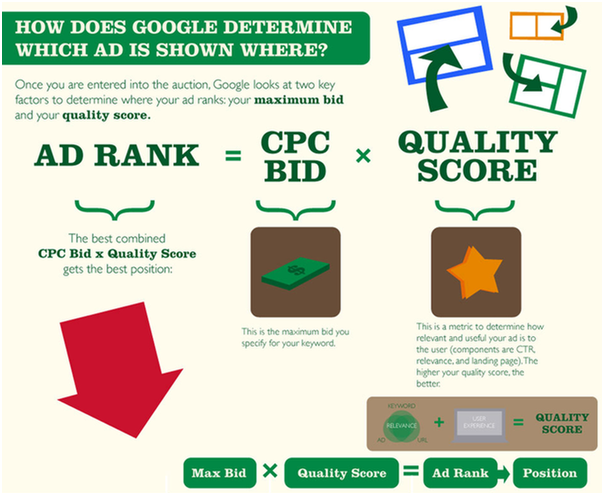 This guide sheds light on how Google’s Ad position works and what you can do to improve the positions of your PPC ads.

AdWords Ad Position Meaning – What does it Mean in the World of PPC?

Google determines the position of the PPC Ads on the SERP (Search Engine Result pages) through a formula known as Ad Rank. The Ad position is calculated in relation to other ads of the same type on the result pages. While doing so, various things are taken into consideration by Google – like the bid, the quality of the ad text and the landing-page-content, the impact of the extensions, and the search conducted by the user, among other factors.

However, one thing that should be noted here is that the Ad Rank may change over time; this is because it is calculated every time the ad from your PPC campaign becomes eligible to appear. It is the reason that even the highly ranked ad’s position fluctuates; no ad ever remains static when it comes to its position. Google AdWords and Bing Ads are paid platforms, they operate as an auction and every time a user searches, the ad’s position can change depending on the keywords searched by the user. But the fluctuations can be kept to the minimum through ad optimization, i.e. by keeping the keywords and the content of your ads highly relevant.

What Affects Ad Position in AdWords?

Ad Position, as already stated is affected by a few factors, but here we are just talking about AdWords, not Bing Ads; this is because though both these platforms have similarities, they calculate Ad positions a bit differently.

In Google AdWords, the most important factor that contributes enormously to Ad position determination is the Quality score; this in itself is a score allotted by Google on the basis of various PPC metrics. It is all about Quality – as its name suggests – and the score is the direct indication about the Quality and relevancy of your Ads in terms of the content of your landing pages, the keywords you are targeting & using in the Ad text. Relevancy is the key; as per Google, better ads tend to be more relevant and are more likely to help users in finding what they are looking for. This is the reason that Google endows the relevant ads better positions on Google SERP.

Though ‘how Google calculates Quality score’ is more or less an industry secret & no one actually knows, but here is an estimated answer as per the industry experts:

As already stated Relevance is of great importance to Google, relevancy is calculated on the basis of following factors:

Note that by working on the relevancy of your Ads, not only can you improve the Quality score but can also improve the ad positions which are directly related to quality score. Have a look at the image given below, the advertisers who have ads with higher Quality score pay less, which means that with an ad which has a higher position, you earn more and pays less; which equals big profits.

Though all Ad auction platforms like AdWords, namely Microsoft’s PPC & Bing Ads, use Quality score metric, unlike Google AdWords, Bing Ads don’t put total emphasis on the Quality score while deciding an ad’s position. For instance, though Bing Algorithm also calculates the Quality score, it determines it on basis of factors like the overall performance and other parameters like Landing page’s quality & relevance. When compared to Google’s AdWords, Bing Ads’ Quality score calculation method is more relative, although even in case of Bing, keyword relevancy and CTR are used as the main indicators in measuring the quality of the ads. It is because of this small difference in Quality score evaluation that even a low-quality ad in Bing has the chance of gaining a good strong Ad position.

It won’t be wrong if we use Ad position and Ad Rank interchangeably, industry experts do that all the time despite the fact that Ad Rank is actually a formula which is used to calculate Ad position by multiplying Quality score with CPC (cost-per-click)

When Ad rank improves, so does the ad position and as the direct consequence, the click-through rates (CTRs) also gets boosted. And since Quality score and CTR are directly related, it positively affects the Quality score; however, the thing that should be noted here is that, for a given ad, the Quality score is not increased unless the CTR crosses the expected CTR threshold. Until that happens, it is true that you might observe a higher number of clicks by bidding for a higher Ad position, but it would not contribute to your Quality Score.